Greetings, fellow book-wyrms. How goeth life? I’m currently chilling behind a reference desk, wondering how I got so damn lucky to have all of my librarian dreams come true, and trying desperately not to think about when my contract expires in two months (*muffled sobs*) but ANYWAYS enough about that.

Before we get started on today’s review, I wanted to share something fun with you, because today’s review is gonna be a tough one. Behold, book-wyrm! 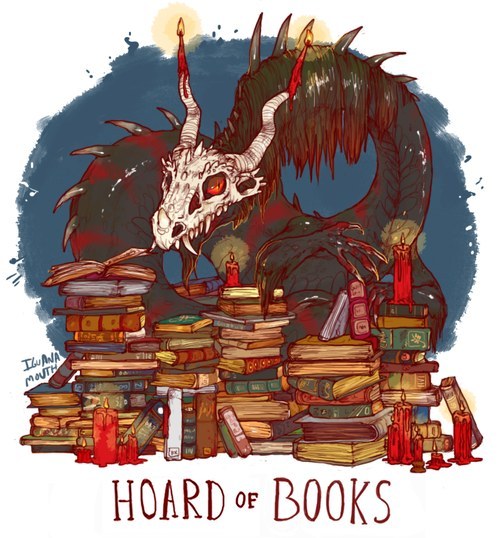 Fun fact – did you know the Old English word for library literally meant book-hoard? How awesome is that???

Now when anyone asks where I work, I’m totally using that. “Hm, me? Oh, I work at the book-hoard, no biggie, just the coolest goddamn place to work EVER.”

Today, I’m reviewing one giant WHY THOUGH of a book: All the Ugly and Wonderful Things by Bryn Greenwood.

I’m going to try to follow my normal review format, but before I begin, I just want to let you know upfront that while I think this book is exceptionally well-written from a technical standpoint, and that I will definitely check out Greenwood’s next book, I loathed this book in terms of story. I’m not judging anyone who might have read it and loved it (which, from the 4.27 rating from 4,956 ratings on Goodreads, is a lot of people), but I gotta say, it must take a lot of mental gymnastics to be able to think that the “love” story depicted in this novel is anywhere near okay. Triggers abound for abuse, underage sex, and, let’s be honest, pedophilia.

The Deal: (as always, courtesy of the book jacket) As the daughter of a meth dealer, Wavy knows not to trust people, not even her own parents. Struggling to raise her little brother, eight-year-old Wavy is the only responsible “adult” around. She finds peace in the starry Midwestern night sky above the fields behind her house. One night everything changes when she witnesses one of her father’s thugs, Kellen, a tattooed ex-con with a heart of gold, wreck his motorcycle. What follows is a powerful and shocking love story between two unlikely people that asks tough questions, reminding us of all the ugly and wonderful things that life has to offer.

Okay, what the actual fuck, guys. The “powerful and shocking love story between two unlikely people” could also be described as a horrifying and unconscionable story about a child mistaking her gratitude for basic kindness and affection for romantic love, and an adult man pretending that sexual attraction to a child he cares for isn’t wrong and illegal and also just really fucking wrong.

Listen, I’m not even going to get into details. If what I just wrote doesn’t say it all, then what’s the point?

Verdict: Jesus H. Christ, people. This is an adult man in possession of all his faculties who enters into a sexual relationship with a thirteen-year-old child. A CHILD. I don’t give a single solitary tightrope-walking fuck about the hows and the whys and the attempts at justifying this fact. It’s creepy, and it’s wrong. This whole book was a slow-motion car crash.

It was well-written car crash, though. Dammit.

I had intended to this non-review here, but I will add that the author, obviously, sees nothing wrong with her novel. I get it – she wrote it. But I also think it’s willfully naive (to put it mildly) to pretend that anybody who responds negatively to this book is narrow-minded or prudish.

If you only read books that make you feel safe and comfortable, what's the point of reading?

In one interview, she said “[the subject] makes people comfortable to say “this is absolutely a bad thing” without knowing anything more than the premise.” Okay. Fair enough. But I read the novel, cover to cover, and I think I can say that I’m fairly well-read and quite open-minded, and I understand and champion the value and the necessity of reading the strange and the unfamiliar. (I’m a fucking librarian.) And I can say that yeah, this is absolutely a bad thing. Nothing about the characters or what they go through makes this okay. I didn’t feel that my worldview was challenged or that I learned anything. I didn’t feel that I gained anything by being forced to experience this literary equivalent of smearing lipstick on a pig.

And you know what, take away the pedophilia and this is any other trite new adult girl-from-the-wrong-side-of-the-tracks falls for violent-but-well-meaning-motorcycle-dude. And we’ve all probably read that story a few (hundred) times.

Best lines: Nope.
Rating: 0.5 out of 10 Men In Black memory-erasing flashy things. The 0.5 is grudgingly awarded for the obvious and undeniable skill Greenwood possesses as a writer. I hope her next book is less… horrifying.

ROBYN’S FINAL THOUGHT: Please save me, Will Smith.

(God, I hope no one reads this review.)