Hey hey, cupcakes. It’s been a minute. Blame that chubby little muthafucka Cupid, whose golden arrow hath pierced my once-frigid heart and set it ablaze with Love’s undying flames. Or whatever.

So as I’ve mentioned (*cough* whined about) before, my brain has got a severe case of the Love-Struck Stupids (band name, write that down) and my Goodreads challenge is taking a hit. And, you know, my intellectual fortitude and general mental well-being.

But fear not, good comrades, for I have stumbled upon a solution – the good old NONFICTION BENEDICTION. That’s right, it’s back, babies.

To the review mobile! This week, it’s The First Signs: Unlocking the Mysteries of the World’s Oldest Symbols by Genevieve von Petzinger.

One of the most significant works on our evolutionary ancestry since Richard Leakey’s paradigm-shattering Origins, The First Signs is the first-ever exploration of the little-known geometric images that accompany most cave art around the world—the first indications of symbolic meaning, intelligence, and language.

Imagine yourself as a caveman or woman. The place: Europe. The time: 25,000 years ago, the last Ice Age. In reality, you live in an open-air tent or a bone hut. But you also belong to a rich culture that creates art. In and around your cave paintings are handprints and dots, x’s and triangles, parallel lines and spirals. Your people know what they mean. You also use them on tools and jewelry. And then you vanish—and with you, their meanings.

Join renowned archaeologist Genevieve von Petzinger on an Indiana Jones-worthy adventure from the open-air rock art sites of northern Portugal to the dark depths of a remote cave in Spain that can only be reached by sliding face-first through the mud. Von Petzinger looks past the beautiful horses, powerful bison, graceful ibex, and faceless humans in the ancient paintings. Instead, she’s obsessed with the abstract geometric images that accompany them, the terse symbols that appear more often than any other kinds of figures—signs that have never really been studied or explained until now.

Part travel journal, part popular science, part personal narrative, von Petzinger’s groundbreaking book starts to crack the code on the first form of graphic communication. It’s in her blood, as this talented scientist’s grandmother served as a code-breaker at Bletchley. Discernible patterns emerge that point to abstract thought and expression, and for the first time, we can begin to understand the changes that might have been happening inside the minds of our Ice Age ancestors—offering a glimpse of when they became us.

So I’ve been making a conscious effort to begin cultivating a meaningful, well-rounded, spiritually healthy life I can be proud of –

Fuck me that sounds like pretentious new-age hipster bull-shit doesn’t it?

Ok so I been tryna cross off the third item on Shaun’s classic to do list. I mean, I’m a grown-up now innit? Bout time. So the room’s been cleaned out of its adolescent fuckery, the books have been (somewhat) weeded, I got rid of most of my band t-shirts, Twitter and Tumblr, the two greatest time-suckers ever known to man, have been banished from my phone… and I have embarked upon a nauseatingly clichéd course of self-improvement of my own design, cribbed heavily from those terrible, eye-roll-worthy lifestyle gurus you can’t avoid on instagram and youtube. I know, I’m pathetic.

So my new morning routine is about as gag-worthy as you’d imagine (“be still for 3 minutes, and embrace the quiet of your newly awakened mind” FUCK RIGHT OFF, ROBYN, YOU ABSOLUTE TURNIP) but one thing I am kinda proud of is my resolution to learn more – actively learn, I mean, rather than the passive sort of serendipitous knowledge thievery I’ve been doing since bolting out of Western with my MLIS and running hell for leather back to the 6ix, home of my people and more importantly, somewhere that is not London-asshole-of-the-world-Ontario.

To make a long story even fucking longer, I’ve been watching TED talks every morning while I scarf down breakfast. I know everyone’s gaga for the TED talks, but I’m finding that they’re definitely a mixed bag for me. I can’t stand the self-help ones. The ones I do like are, surprise surprise, the ones in which a nerd gets to nerd out for 12 epically nerdy minutes. Watch it yourself right here (see what kind of service you get on this blog? smh i’m amazing)

Mind understandably blown, I did what any sane person would do, and went to the library. Okay, it was 6:15 in the morning and I had to work, so I actually went to the library’s website – and here, my good people, we have an example of one of the classic arguments in favour of ebooks, because I was able, with only a few clicks of the mouse, to check out the digital edition of von Petzinger’s book and start reading it less than 3 minutes after watching her TED talk. Fucking amazing. Yeah technology. Yeah science. Yeah nerds. Yeah books. YEAH LIBRARIES BITCH!

Oh… you wanna know about the actual book? Ok, jesus, calm down, keener.

It was fucking awesome. It’s amazing to actually read about something that is probably a huge a discovery as it’s in the process of being discovered. Von Petzinger basically stumbled into her field of research thanks to a fateful mixture of serendipity and curiosity, and even though she’s still conducting her research and her conclusions are constantly evolving, it’s clear that she’s onto something big. The book basically discusses her attempt to catalogue the geometric signs of Ice Age Europe’s cave art, which have been pretty much uniformly ignored by previous scholars who preferred to focus their attention on the depictions of animals that dominate most sites.

(And sidenote, if you wanna live your best life you should IMMEDIATELY watch the documentary by the one and only, the king of glorious weirdness, the great Werner Herzog himself, Cave of Forgotten Dreams… oh look I found it for you YOU’RE WELCOME)

Back to the squiggles. Some reviewers seemed to be dissatisfied with the book because von Petzinger doesn’t actually draw many conclusions from the data she’s collected. For me, that wasn’t a problem – if anything, I was relieved. She’s still deep in the process of collecting information. Anything beyond very general hypotheses would be far too hasty. Good science is slow science. While von Petzinger does theorize that it seems likely the geometric signs found all across Ice Age Europe and Asia have a common origin and perhaps even common meanings, she doesn’t touch on what those meanings might be – because it’s impossible to even guess at this early stage.

I really enjoyed the exploration of early humans and language, both verbal and nonverbal. It made me want to dig out my old linguistics textbooks from undergrad. Actually, this whole book made me curious. I want to keep learning – not just about Ice Age cave art, but about early humans in general, language development theories, the first written languages, the development of alphabetical writing systems… and so much more. And isn’t that the mark of not just a good nonfiction book, but a great one?

Read it. Amazing. Mind-blowing. Will cure you of the worst case of the Love-Struck Stupids since the Trojan War, when basically everyone was Love-Struck and Stupid.

<insert science-y quote here> God, screw y’all, what I am, your mama? Go read the damn book for yourself. 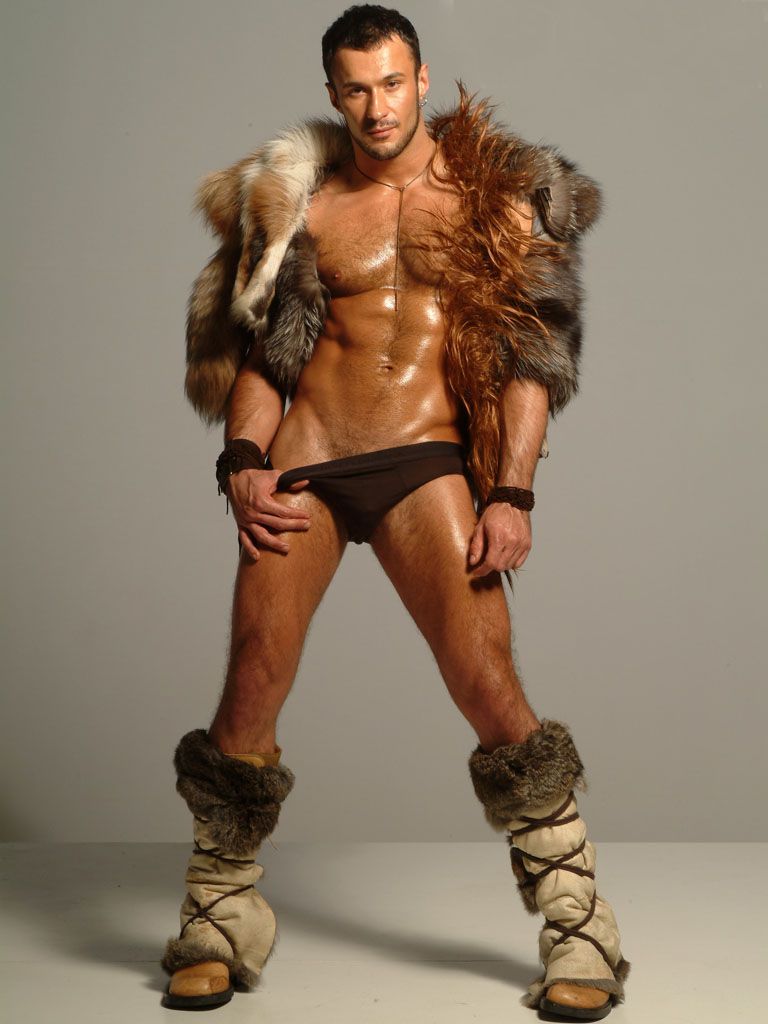 Listen I googled “sexy caveman” and this was the first result? Who am I, a mere mortal, to question the awesome and all-knowing Google?

Leather speedo up there. He’s no broad-shouldered, ill-tempered, dragon-slayer, but he’s really rocking that fur stole.

*Werner Herzog voice* Those abstract and chaotic signs inscribed on the walls of a man’s heart are unknowable, for in the cavernous darkness of the soul, no light ever shines upon them.

Until next time, pop-tarts and -tarlets!

1 thought on “Nonfiction Benediction: THE SEQUEL”