Ayyyyyyy how goes it, my deliciously crumbly shortbread biscuits? I myself am in a bit of a funking funk, to be honest, and the only thing to blame is summer (okay and myself, jeez, lay off, I’m a delicate thing, you know). Bloody summer, most extra of all the seasons, with literally zero chill (lol); summer, summer, when children run wild and free in the streets, flaunting their savage insouciance in the face of hardworking office drones who toil thanklessly in frigid cubicles; summer, the twilight of the goths, when our mortal enemy (after jocks and valley girls), that brazen bastard the sun, squares up and flexes, burning us all to an antisocial crisp. Only 79 days until Halloween, and then we’ll have our Plutonian revenge, you’ll see, YOU’LL ALL SEE–

Ahem. Sorry, got a bit carried away there. My bad. I just really really hate summer. The dragon-slayer, on the other hand, is an inveterate sun-worshiper, which not only lends the season an unbearable irony, but also means I will undoubtedly be forced to spend my weekends in the actual outdoors rather than the dark, cold sanctity of indoors, where all the sensible people will be. 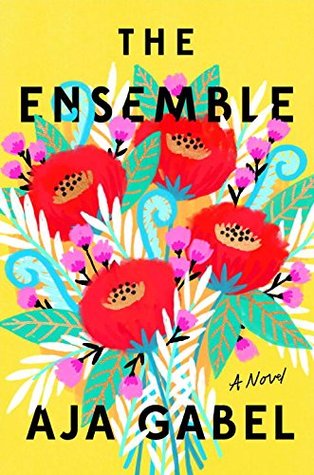 YAAAAAAAAAAAS I love it. So bright. So colourful. So unrelated to the story (?) (Listen I dunno it just works ok? This is Good Book Cover, it’s math).

The addictive debut novel about four young friends navigating the cutthroat world of music and their complex relationships with each other, as ambition, passion, and love intertwine over the course of their lives.

Brit is the second violinist, a beautiful and quiet orphan; the viola is Henry, a prodigy who’s always had it easy; the cellist is Daniel, the oldest, the angry skeptic who sleeps around; and on first violin is Jana, their flinty, resilient leader. Together, they are the Van Ness String Quartet.

In The Ensemble, each character picks up the melody, from the group’s youthful rocky start through to adulthood. As they navigate devastating failures and wild success, heartbreak and marriage, triumph and loss, betrayal and enduring loyalty, they are always tied together—by career, by the intensity of their art, by the secrets they carry together, and by choosing each other over and over again.

Following these four unforgettable characters, Aja Gabel’s debut novel gives a behind-the-scenes look into the highly competitive, mysterious world of high-level musicians. The story of Brit and Henry and Daniel and Jana, The Ensemble is a heart-skipping portrait of ambition, friendship, and the tenderness of youth.

It’s cliche af but I’ve always had a passion for the violin – yeah, yeah, the Gypsy with her violin, I know (also friendly reminder, I can say the G-word because I am one, you can’t, don’t @ me). I played (badly) for a of couple years. but gave it up when I realized I would never be the next Nicolae Neacșu. Instead, I listen to classical music that makes the violin the star, and watch and read anything remotely related to the instrument, fiction and nonfiction… *cough* The Red Violin *cough*

There’s been a lot of buzz around Aja Gabel’s debut novel, and the cover is so pretty I added it to my summer reading list before I even knew what it was about (thanks, Instagram). I was prettttttttty psyched when I discovered it was about the inner workings of a string quartet, because that shit is one of my many jams.

First thing first, let’s get it out of the way – did it live up to the hype? YES. This is a Good Book, guys, get thee to a library and put it on hold and in 3 months READ IT. Or I guess you could buy it, if you’re okay being a slave to literary capitalism.

The most obvious strength of this novel is its characters. Gabel has created a quartet of four vastly different, incredibly realistic protagonists, and each of them is incredibly rounded, with as many characteristics to admire as to loathe. There’s driven Jana, Henry the prodigy, human equivalent of flan Brit, and angry child-of-my-heart Daniel.

The quartet becomes a sort of family for the musicians, and like all families, there are as many moments of tension and struggle and heartache as there are of happiness and support and, yes, love.

This is undeniably a character-driven novel, though. If you’re looking for action, there isn’t much beyond a pretty predictable plot – not that this is a bad thing. I knew exactly where the story was going, and I still enjoyed every minute of it. Gabel’s writing is delightful, artistic and precise without erring on the side of pretentious. I can’t wait to see what she produces next.

A longer one today, actually. I am in a Mood and this passage just hit me right in the feels:

I’m at work and the pages are snitches so there’s no way I’m risking googling hot young actors to fancast this book. Also, it’s so hard when a book spans decades. Do I find actors who kinda look alike to be the younger and older versions, or do I pick one and let you use your imagination? Anyway, it’s moot because of the snitches so ¯\_(ツ)_/¯

Listen I don’t want to say Daniel. He’s probably a hot little swarthy son of a bitch but he’s selfish, he’s thoughtless, he’s outright cruel on more than one occasion, he’s an unmitigated piece of shit with more ambition than talent.

8 out of 10 temperamental musicians sawing away on the strings of their overpriced instruments.

This is the last book I read with Titus. I miss him so much, and I miss being able to turn to him to ask what he thought. I’m sure he would have had something savagely clever to add to my pitiful review.

Here’s Book Cat, curled up and cozy with the Librarian who still loves him ♥